Every breed has a “standard” that thoroughly explains its appearance. Written by the national club that represents the breed. The standard is like a blueprint in words, describing in detail how the ideal specimen of the breed should look. Reputable breeders think of the perfection, and strive to produce animals that comes as close to it as possible.
The standard of the Chow Chow is written in a simple straightforward manner that can be read und understood by even the beginning fancier. It takes many years, however, to fully grasp all of its implications.
This can only be accomplished though observation of many Chows and ready as much about the breed possible.
What follows is meant to assist the beginning fancier to develop a sense of the important characteristic of the breed.
There are some breeds that change drastically from puppyhood to adulthood. It would be extremely difficult for the novice t determine the actual breed of some dogs in puppyhood 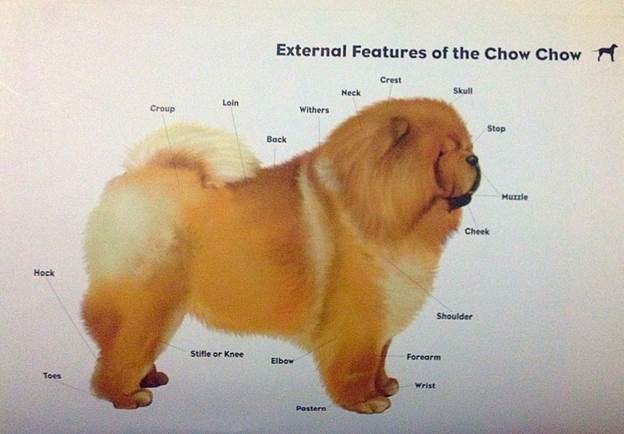 as purebred as the puppy might be. This is not so with Chowlet. At eight, weeks of age, a Chow puppy will look in miniature very much what it will look like as an adult.
Above all, the Chow is square built, stalwart looking dog. Its body, measured from breastbone to buttocks, square with height at the top of the shoulder(withers). Looking at the Chow in profile, the distance from the withers to the bottom of the chest is the same as from the bottom of the chest to the ground.
Been a Nordic breed Chow Chow must have a weather -protective coat, which both the rough and smooth Chow do have. The rough Chow simply has a longer hair, but both varieties have thick, straight hair that is coarse and weather resistant.
The Chow’s large, proudly carried head is one of the breed distinctive features. Even though the Chow is a good-size breed in itself, the head appears large in proportion to the body.
The ears must be small, moderately thick, triangular in shape, with a slight rounding at the tip, carried stiffly erect but with a slight forward tilt.
The muzzle is short and broad. The skull is large, broad and flat. The nose must be black except in the case of the blue Chow in which an allowance is made for a blue or slate-colored nose.
The lips and inside of the Chow’s mouth should be black. The top of the tongue must be black.
In total, the Chow’s head is massive and its expression is scowling and aloof. This gives the breed the inscrutable and dignified leonine look so typical of the Chow Chow.
Another distinctive features is its heavy boned gun-barrel-straight legs, which are set at the four corners of its body. A short -legged Chow is totally contrary to the very essence of the breed.
Good front legs appear sturdy and strong-boned but are not too thick that they are out of proportion with the rest of the body.
Good Chow Chow hind quarters are powerful and broad, with well-muscled hips and thighs.
The ideal Chow’s body is broad, deep, well-muscled, short and compact.